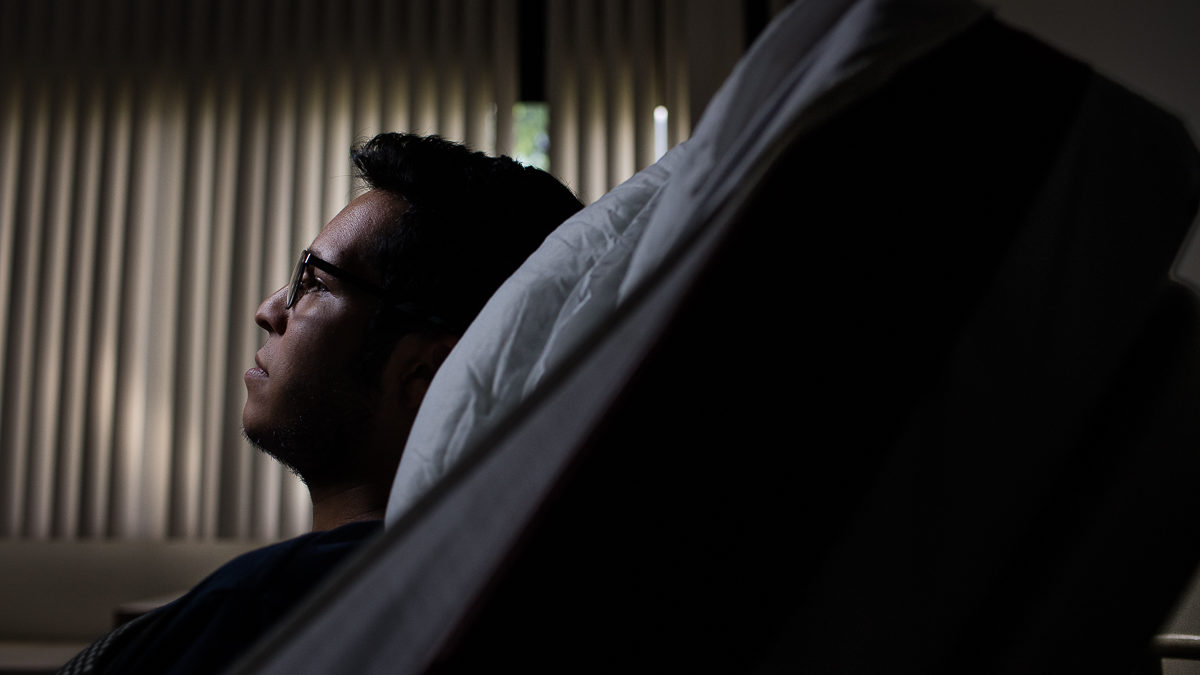 “This is not opposition against government: it’s the country against
a dictatorship”

“They brought me only one shoe from my house: the right one. I will not use the left one for three long months.

Las year, with my first good salary, I bought a pair of Kickers. I lost them. The bullet opened two holes in it. A policeman who saw them at the clinic told me: “boy, that is a 9 milimeters”.

I was going to the marches without a cell phone because it got stolen, so when I won the prize (2nd National Young Poetry Competition Rafael Cadenas), my girlfriend insisted I bought one. And a pair of glasses I needed. I have astigmatism and myopia. I am shortsighted. That’s what I used the money from the prize for. There was not much left for anything else.

The mask was having problems on June 19th. I kept putting it on and off. It rained. I hadn’t found my group, my friends. I thought about leaving many times. Things were not going well, but I decided to stay until five in the afternoon. I was shot at four.

I thought a bullet was something cold, small, that goes through you. But no, a gunshot is a blow. A brutal blow. Three steps and I threw myself on the floor. The brotherhood that exists between us made them lift me and put me on to a motorcycle very quickly. I was shot in the ankle. It went through without touching any bone. Incredible.

I have been shot with bombs and marbles, pellets I am not sure, because I have all these scars that I don’t know what they’re from.

When I arrived to Altamira square I called my girlfriend and told her that I was in an ambulance and that I had been shot with pellets, so she wouldn’t worry.

I’ve been writing since I was thirteen years old. I have won prizes for short stories and one from the National Center for History for an essay about The Jamaica Letter. This year I was the runner up in the 2nd National Young Poetry Competition Rafael Cadenas and my topic was language, even though I don’t feel like
a poet.

I write as a commitment to myself. I protest as a commitment to myself. What is my role and what is my responsibility? To be there that Monday. That was my natural space to occupy. That day a young man died [Fabián Urbina]. Any of us who was there could have died. Seven were wounded. I was not afraid and that is why this happened to me. I see conviction ahead. At the front. On the other side, I am not sure what it is that I see. I was there, when I was a child, on 13th April [2002] until three in the morning waiting for Chávez to return to Miraflores and there you could see conviction. People defending their president with broom sticks. My family stopped being chavista many years ago. I wasn’t because I was only a child, and that conviction doesn’t exist anymore.

The one who shot me? The one who shot me has a girlfriend and writes to her, sleeps somewhere, has socks and shoes, can have children, listen to music, practice sports. He brushes his teeth with a toothbrush every morning. He has a life.

He made the decision the moment he went out with a gun. There is determination on his part. That carries responsibilities and implications. He will say on trial that he fired out of fear, but I was there: it was an act
of power.

I don’t care why he fired, what worries me is that he will not regret it. I don’t feel superior to him, but I don’t need to shoot. I would gain nothing. On the contrary, I would lose a lot. This is not opposition against
government: it’s the country against a dictatorship. I am part of a generation that feels its strength. If they won’t give us the space we deserve, we will earn it.

I don’t wear a vest or carry a shield to protest. I wear a sweater. I put away the glasses because they’re new. I don’t like smartphones. I handwrite and want to buy a typewriter. I don’t trust technology. I wrote my winning poem on little yellow papers, ‘Post It’, and pasted them in the office. I don’t have money to buy a ticket. I will spend a lot of time sitting and I have a thesis to write”.