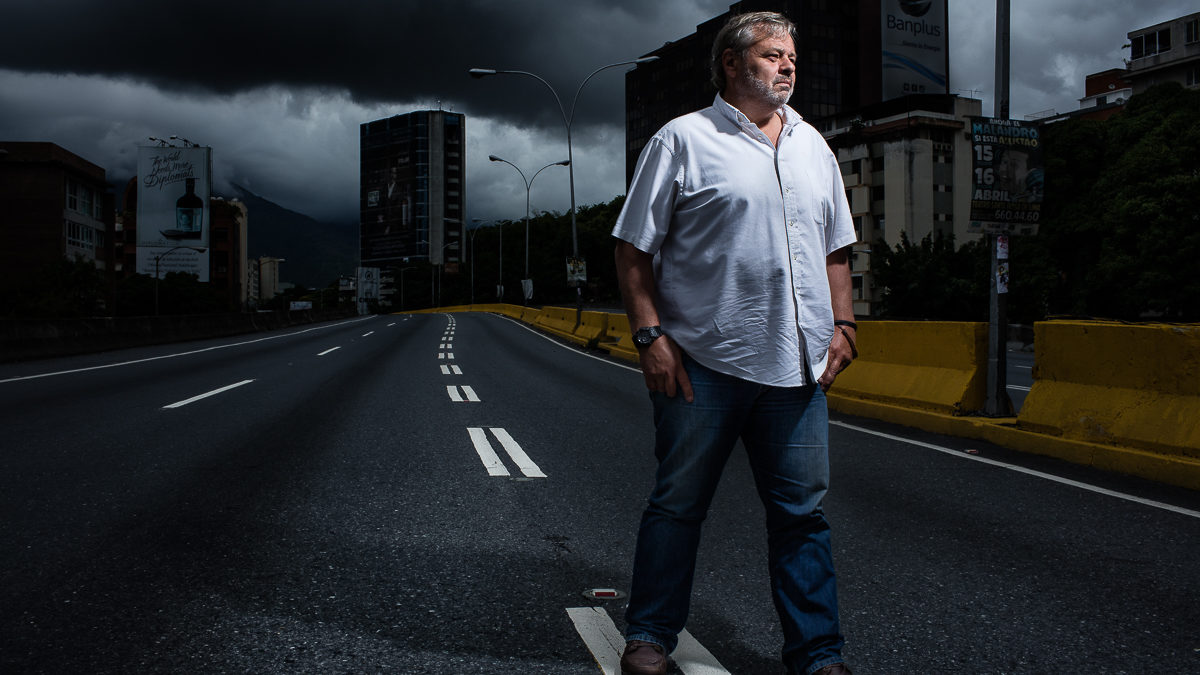 “I went with my wife to the Tamanaco Mall to fix a problem with my cell phone, and after I went to the parade on June 5. I parked my motorbike outside the shopping mall, opposite La Carlota military airstrip. We walked towards the freeway to see what was happening. It was 11 in the morning. There weren’t many people. There was no parade or National Bolivarian Guard.

Suddenly, out of nowhere, at least 20 police motorbikes arrived with two on each. People started to run. Bang, bang, bang. I tried to leave and I took the padlock off the motorbike, but I realized that if rode away they’d shoot at me. We ran to protect ourselves, and in the smoke I saw them kicking my motorbike, with fury but without much force. The bike didn’t fall over. Then one got on and between five or six police they pushed it and put it in La Carlota. I was about forty meters away when they took it.

When the smoke subsided, I decided to go and find it at the entrance to La Carlota. I went in alone and with my hands up. The protestors were hiding and I asked them to stop throwing stones after one hit my helmet.

“Hey, I’ve come to get back my motorbike. The motorbike you took was mine.”

“Guarimbero (violent demonstrator). What were you doing there?”

“I was just there, like you are here. Aren’t I allowed to be there?”

“Guarimbero. Go away, you’ll just get stones thrown at you if you stay here.”

They hit me with their shields and the took my helmet and the swim goggles I carry on me when I think that there’s the risk of teargas. I refused to go on the defense: I didn’t hold up my arms or protect my face. That’s the strategy for non-violent combat. It even works with dogs.

“Why are you hitting me? Have I hit you?” I asked him.

They asked me for the keys to the motorbike. I told them that I wasn’t going to hand them over.

Some more police went by on motorbikes firing tear gas and my wife started to panic. The same policeman who threatened me with stones said:

He was inside, and we were outside.

I decided to go and two police from Chacao on bikes. I told them that my motorbike had been stolen. They took the report and said:

“Sir, the best thing for you to do is to go back and get your motorbike, because it’s right there inside.”

The police were hiding out of sight.

“Get away, guarimbero, there’s no motorbike here.”

Then another arrived and said:

“That’s impossible. They brought it here less than ten minutes ago.”

I left not knowing what to do. But I tried for a third time.

“My motorbike is here, you have it and I’ve got that on camera. Everyone saw you, I saw you. And         you took my helmet. I’ve got the paperwork and I know it’s here. That’s private property and you         have to give it back to me. I want my motorbike back.”

“Do you know what? I’m a foreigner, and in thirty-one years in Venezuela I’ve never seen so much         violence.”

I’d never been in a situation like that, and I’d never seen the police act like that either. I’m going to complain to my embassy.

Saying that was like throwing a grenade of teargas over the entrance barrier. There was an explosion of anger. Another cop came from out back who’d been listening to everything out of sight.

He said it many times. I felt like they hated me. On the suggestion of a group of reporters, I went from there to the district attorney’s office in a cab.

This hurts me a lot. My life is tied to this country. My wife and my kids are Venezuelan. I love the people here, the landscapes, the music and the culture. When I go to Belgium I’m not part of that world. I don’t get them and they don’t get me. Venezuelans wear their hearts on their sleeves: they’re affectionate, they don’t hold back. It’s a deeper feeling. I have a mission in Venezuela: to set up a foundation to monitor sea turtles in Paria and to teach kids and fisherman in the area about them.

I’ve been teargassed many times. Most people start to choke but I keep walking at my own pace. I don’t run or throw myself in the river. If they’re going to kill me, they’ll kill me. I’m a swimmer, that’s how I cope with the pressure. We must persist.

Pierre Dumont, 58, psychologist, businessman, married to a Venezuelan woman with two Venezuelan children. He arrived in Venezuela on 29 April 1986, with no plan